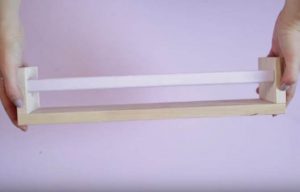 What a multifunctional spice rack!

We are all fans of the cheap Swedish furniture giant IKEA and often go there for a day. Almost everyone has a number of IKEA items in their living room. Not surprising that it is one of the most visited stores in the world!

Who hasn’t had a LACK table?

There are IKEA items that undoubtedly almost everyone has in their house because they are so functional and cheap; do you know the LACK table for example? This also includes the BEKVAM spice racks. Unfortunately, often it is lacking a bit originality and we want to make such a mass product a bit more ‘of your own’. Fortunately there is the phenomenon ‘IKEA Hackers’: all kinds of ways in which you can use IKEA products in your home, but just a little bit different. Take the spice racks, you have to see what you can do with them!

Did you know that IKEA was not founded by someone who had a big bag of money? No, the chain was founded by Ingvar Kamprad who, as a seventeen-year-old boy, received some extra money from his father because he did well at school. With this little extra money, Ingvar decided to sell pens, photo frames, jewelry, tights and other accessories. Only later did furniture come into the range.

On the next page you can see what you can do with those nice spice racks!